Heracles(ヘラクレス, Herakuresu?, Hercules), Class Name Berserker(バーサーカー, Bāsākā?), is the Berserker-class Servant of Illyasviel von Einzbern in the Fifth Holy Grail War of Fate/stay night. He is one of the Servants of Ritsuka Fujimaru of the Grand Order conflicts of Fate/Grand Order. 1 Profile 1.1... 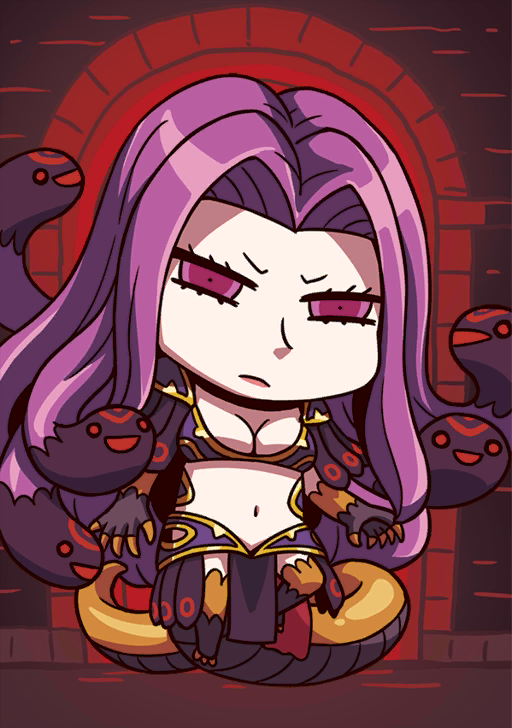 Nasu-san CHECK!
The two boasting the most outstanding speed in the game. Rider, able to move like a bullet and race around the battle field vs Lancer, able to counter attackers with a lance with the speed of gods, while standing still. In average speed, Rider is faster, but in immediate maximum output, Lancer will win. While Rider has several different types of Noble Phantasms, Lancer also has protective ability from rune sorcery, hence counter measures from her mystic eyes. Against an expert monster exterminator like Lancer, one who has a monster alignment such as Rider might seem to be in for a tough fight....!?
Hacer clic para expandir...

Mystic Eyes: A+
The possession of Mystic Eyes of the highest level, "Cybele".
Those whose MGI is C rank and below will be unconditionally petrified, while those of B rank will be petrified depending on the result of saving throw. Those of A rank will not be petrified, but suffer a rank down on all of their abilities and receive a "heavy pressure".
Hacer clic para expandir...

A storming whirlwind.
Berserker's axe-sword is repelled each time.
By the "Noble Phantasm" of one Servant,
the one reigning from the throne of rubble in the center of the hall.

Many swords are released.
Each one of the weapons appearing from behind the man would cause certain death.

"――――!"
They attack.
They are like gushing water.
The infinite Noble Phantasms not only repel Berserker's axe-sword, but pierce his body.
Hacer clic para expandir...

"Then let me finish you off now. It will be unpleasant for you to come any closer."
―――At his signal, the numerous Noble Phantasms descend on the giant.
The giant repels most of them, and at the same time, loses most of his life.
Hacer clic para expandir...

"Damn―――a mere target survived my attack...!?"
The magical bullets are fired mercilessly.
Repelling it with his axe-sword, the giant corners the man with his body slashed and with his limbs pierced.
Hacer clic para expandir...

"You lowlife――――!"
Numerous arrows are released.
Was it his last charge, or did he just get used to the attacks?
The giant repels all the arrows.
He approaches the owner of the Noble Phantasms――――!
Hacer clic para expandir...

He will not reach the man.
But he still challenges the man because there is something he cannot give up.

―――Then what is he moving forward for?
Servants fight for their Master, to protect the Master's life.
That is why that giant does not retreat.
He can only move forward as a shield to protect the frightened Master behind him.
The giant continues his foolish advancement.
It is because he knows that he needs to take all the attacks in order to beat that Servant without having his Master killed.
Hacer clic para expandir...

A danger-avoidance ability based on instinct or a sixth sense, that helped Heracles weather numerous difficult adventures. Even though the user has lost his intellect, the skill still functions close to its original level. Even when facing a seasoned swordsman such as Artoria, Heracles did not fall for half-hearted feints. It is truly a troublesome ability for the opponent to deal with.

Caption: Heracles is of huge stature yet possesses a high rank in Agility, making it extremely difficult to corner him.
Hacer clic para expandir...

She must have understood me, as she turns her back to Berserker and jumps away with all her might.

Right after her retreat...
He shoots the "arrow".

Saber jumps back like a spark, and Berserker tries to pursue Saber.
Archer's arrow is fired right between them.
Archer's arrows have not had any effect so far.
The black giant ignores it, as if saying it's not worth blocking.

But at that moment...

"――――――――!"
I throw myself on top of Saber and brace myself.
Maybe I've gone deaf, as I can't hear anything.
All I can feel is the heat burning my skin and the shaking of the ground.
Many things go flying through the air, and a piece of something pierces my back.

"......!"
I grit my teeth and endure it.
The blinding light must have only lasted for an instant.
I manage to survive the destruction.

"Wha――――"
Saber is staring in astonishment.
...I'm doing the same as well.
I don't know what happened.
Archer's "arrow" razed this cemetery in an instant.
There's a crater at the center of the explosion.
Archer has created this destruction.
But the giant still exists in spite of such abolition.

"Berserker... He is unwounded even after taking a direct hit from a Rank-A Noble Phantasm――――"
Saber's voice is weak.
Sparks are flying through the night air.
The black giant is standing still in the fire, and everybody here watches this terrible spectacle without words.
Hacer clic para expandir...

Q: Berserker took no damage from Archer's A-rank Noble Phantasm "Broken Phantasm" (Caladbolg), is it ineffective due to Berserk's Noble Phantasm, or was he simply able to withstand it naturally? <Not Mr. Shanoa>

Nasu: Oh, that. In the original work it was like "Even though up until then none of the attacks had been worth dodging, this one would have been fatal, so Berserker counters → the resulting explosion from the Noble Phantasm is devastating." Yet in the anime version it was handled as "Berserker could not respond to it due to a severe injury from Saber → losing one of his lives, and regenerates," which may be something to think about. In all he lost 2 lives because of it.
Takeuchi: Oh, so that's why God Hand in the anime version needed 3 days to recover!
Hacer clic para expandir...

"I can't wait any longer! Have you healed, Berserker!?"
"―――――"
He does not even need to answer.
Wounds that are not fatal will be fully healed within few minutes.
But――restoring everything would take three days.
"I can't wait that long! It's fine, we're going to go kill them right now!"
"―――――"

The giant silently objects.
It is his instinct.
Berserker has an intuition like Saber's when it comes to fighting.

The enemies can certainly be mowed away easily.
But it will be a different story if Servant Saber has recovered enough to use her Noble Phantasm.
Berserker will not yield to a mere holy sword, but there is a small chance.
His instinct tells him that if he is to fight that Servant, he should engage her in perfect condition.
Hacer clic para expandir...

Heracles is an excellent warrior who possesses the qualifications for the six classes other than Caster. He specializes with the bow, but he has mastered all weapons. However, this only applies when he is not a Berserker. Heracles as a Berserker has lost his intellect, and exists only to utterly defeat the enemy head-on as directed by Illya. Naturally, he thinks nothing of detailed tactics, relying on his physical ability and a massive axe-sword. Astonishingly, even in this state he demonstrates hand-to-hand combat prowess superior to every Servant. He spares no thought for defense, leaving that to his Noble Phantasm "Twelve Labors."
Hacer clic para expandir...

This Class Skill characterizes Berserker, augmenting the user's abilities at the cost of reason. Heracles possesses the skill at Rank B; in compensation for losing most of his sanity, all of his parameters are boosted. Heracles beat his harp instructor to death when he was a child, and had many episodes when he killed people in rage without even hearing them speak. It seems that for Heracles, a maddened Berserker was an easy class to adapt to. To facilitate control when out of combat, Illya suppresses the rank of Mad Enhancement.

As one of the strongest Heroic Spirits, Heracles was undoubtedly the strongest among the Servants even when restricted to simple close-combat. However, because of Mad Enhancement, a variety of techniques and skills, and a portion of his Noble Phantasms are lost. Heracles' emotions were sealed and he was unable to perform any actions out of free will, but some trace of reasons remained within his core, leading to occasions where he felt something like a desire to protect Illya.
Hacer clic para expandir...

The black rock sword is just like a storm.
With such a large body.
And with such a large sword, and yet Berserker is moving faster than Saber.
The attacks he sends out are just smashing swings with no technique to them.
But that's enough.
If there is overwhelming power and speed, there is no room for technique.
Techniques are something humans invented to compensate for their weaknesses.
Weaknesses are things that giant doesn't have.
Hacer clic para expandir...

"Saber, what would happen if you fought Berserker again? ...Um, will you be unable to win as long as I'm your Master...?"
The greatest burden for Saber.
I ask her about the weakness that prevents her from using her powers at their full potential, just because she made a contract with an immature Master like me.

"That is incorrect, Shirou.
Even if you were a mature Master, it would make no difference to the fact that Berserker is a powerful opponent. You do not need to condemn your own inexperience for this fact."

"No. Even if I was at my full potential, it would be difficult to defeat Berserker. ...No, it may be impossible for any Servant to beat that giant.
Hacer clic para expandir...